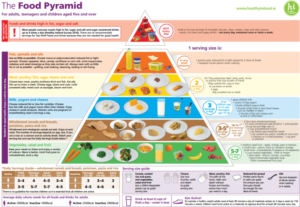 It’s the same old story because Dairy is still there in the middle with a whopping 3 servings per day.

And why is that not a good thing? Simply because the evidence against Dairy is so overwhelming. Dairy products contain saturated fat, cholesterol, transfats, man made toxins, naturally occuring toxins, and excessive amounts of unwanted hormones like Oestrogen and Insulinlike Growth Factor.

All of that adds up to measurable increased risk of heart disease, diabetes, obesity, as well as breast cancer, prostate cancer, and other hormone dependent cancers.

And yet Dairy is right in the middle of the new food pyramid.

Its like having cigarettes right there, being recommmended for a healthy lifestyle. And the similarity with cigarettes is a telling one. Back in the 1950’s the American Medical Association stated that “There is no evidence that moderate smoking is injurious to health”. While at the same time receiving tens of millions of dollars from the tobacco industry.

Today, big tobacco is replaced by big dairy and big meat lobbies. The pour millions of euros per year into promoting their products, regardless of our health. They are buying influence over ill informed medics and government policy makers. And the health department is well aware of the furore that will erupt if Dairy is NOT featured prominently in the new food pyramid.

However, just as tobacco was eventually exposed for its deadly effects, dairy is continually under attack from the facts. It is just not a good food, and the less we eat the better for us. Certainly 3 servings a day is insane for anyone wishing for optimum health.

Click Here or on the link above for full details on the facts about health risks of dairy consumption.