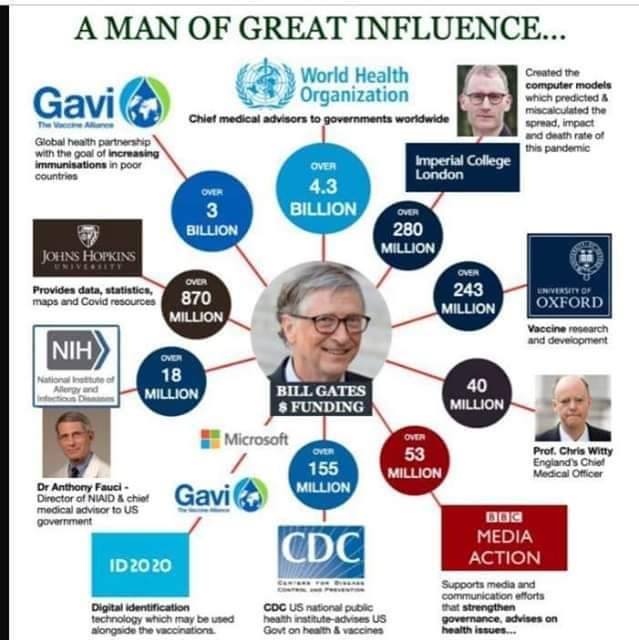 Lie 1. Covid 19 developed out of the blue when people ate bat soup at a market.

Fact: Anthony Fauci, the Covid tyrant of the USA, has a long history with the virus lab in Wuhan. And he funded research to genetically engineer man-made potent corona viruses.

Denmark culled its mink population in 2020. The reason is mink and ferrets have similar respiratory systems to humans. Ten years ago, scientists at Erasmus medical centre in the Netherlands started an experiment using ferrets. They injected one after another with flu virus. They were looking for a mutation that would be more virulent. This process became known as “Gain of Function” research, facilitated by advances in gene technology. The idea was to manipulate viruses to literally gain new functions, in order to research more virulent strains and be better prepared for them.

Of course, this research was highly controversial. It was likened to a Frankenstein monster approach, and was regarded as highly dangerous. In fact, the Obama administration in the USA outlawed it.

Undeterred, Anthony Fauci went right ahead and outsourced the research to the lab in Wuhan. In fact, he comissioned research to see what viruses can infect both animals and humans. The description of the research project was specifically gain of function.

Furthermore, details have emerged of the research that Fauci funded. The Wuhan lab went out and collected bat feces, and discoved novel coronaviruses in the batshit. They genetically engineered those viruses. They created new genetically engineered viruses, and infected human cells with them. They then showed they could replicate them as a functional virus. And the virus identified as covid 19 uses the same process of infection as the virus they created. That project continued for three years.

How does Covid 19 compare? It appears to be highly infectious. The backbone of the Covid 19 matches the genetically engineered viruses. It was especially infectious when it first appeared.

Covid 19 may not have been released maliciously. But at the very least, the decision by Fauci to commission was reckless and resulted in a genetically enhanced virus escaping from the lab. Fauci is likely the villain, and instead of being investigated, he becomes the tyrant of lockdown.

Fortunately for us, the Covid 19 virus has quickly “lost function” to use their terminology.

But, whether released by accident or design it now serves a function to control and manipulate the population.

Regardless, the origins of covid 19 are being covered up. And those responsible for the reckless “gain of function” experiments have been promoted rather than called to account.